As the first structures built by humans were likely living quarters, sloped roofs were probably initially utilized for keeping them as dry as possible. It simply made the most sense to use the advantage of gravity on houses. As homes got bigger, roofs got bigger, but in certain parts of the world, those less affected by large amounts of precipitation, flat roofs began to be constructed for various reasons. For one, the light rainfalls meant less of a need to drain away water. Two, it was more important to create a barrier from the sun’s persistent heat and exposure as locales where flat roofs were employed were, and are, in primarily arid regions. Three, and maybe most important for many, they are cheaper to frame and construct initially. Regardless of which factor, flat roofs were understood to have numerous positive qualities that have made them the go-to roof for nearly every commercial building of any substantial size. Many homes also have flat roofs on a much smaller scale, and in conjunction with pitched roofs.

With the abundance of flat roofs, generally considered those roofs that have pitches of 3 inches in 12 or less, builders and roofers must decide between various systems when constructing. While several types of flat roofs exist, the predominantly used materials are thermoplastic polyolefin (TPO) and ethylene propylene diene monomer (EPDM). Both systems utilize a single ply membrane, but they have distinct advantages and disadvantages that make each worth using depending on the situation. 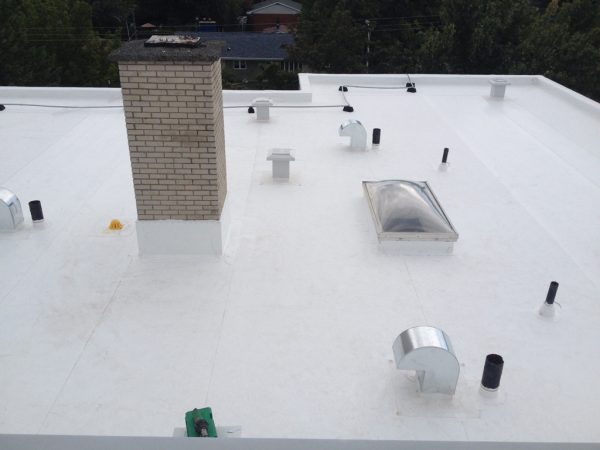 EPDM roofs have existed for around 60 years. Like TPO, they are a rubberized material, but they can be either vulcanized, which means they are dried and cured, or non-vulcanized, which means they stay perpetually in a semi-solid state. The vulcanized product is used for the actual roofs while the non-vulcanized is primarily used for flashing and/or detailing. All EPDM roofs are black, although they can be given a white overlay, which has a great benefit: UV ray and heat deflection. Without the white overlay, EPDMs are susceptible to retaining heat, although the whitening process is not without its negatives. To make EPDMs white, a laminate mixed with titanium oxide is created; the mixture is somewhat unstable, and the laminate does tend to weaken and wear quickly. Due to this concern, most builders keep the black surface intact to maintain the higher strength level.

EPDM roofs are definitely strong. As long as they are properly seamed and maintained, the roofs have an average life of 20 to 25 years. Additionally, the sheets of EPDM tend to be larger than TPOs, which means they have fewer seams to join. This often lessens the chances of seepage over time. They are affected by various substances though. The sun, again, will greatly heat the materials. This causes shrinkage, which can mean that seams pull apart. Another concern, especially for certain industries such as food services or those that involve animal byproducts and/or oils like petroleum, is the distortion that occurs when such oils contact the rubber that is or will become very hot. Over a short amount of time, this distortion will damage the surface beyond repair.

TPO roofs have only existed for around two decades. While the initial materials to purchase are expensive, especially drying tools and installation equipment, these are one-time purchases that can be used multiple times. The actual product tends to be cheaper than EPDM, although the performance is as productive. One aspect that gives TPO an advantage over EPDM is that it is white without titanium oxide. A white overlay is laminated to the rubber surface, and this overlay has a much longer life than the whitened surface of EPDM. However, the laminate can be compromised if not maintained, and this will greatly weaken the TPO performance. If kept up, though, the life of a TPO roof rivals that of EPDM roofs.

TPO roofs do have great strength and lasting power. One reason for this is the installation. TPOs can be mechanically attached, using screws, or fully-adhered with glue. Additionally, the seams may also be glued or heat welded with a specialized tool. TPOs also tend to be more rigid than EPDMs, a trait that may make it more difficult to install but also may factor into its long-term strength. It is highly puncture resistant, and it has a huge advantage over EPDM regarding its resistance to animal fats, hydrocarbon and vegetable oils, and even microbial growth. Thus, it can be used in essentially any flat roof situation effectively.

EPDM roofs have been around for many years, but TPO roofs are emerging as the favorite for manufacturers with TPOs accounting for a larger market share than EPDM. Certainly, this is due in large part to the lower cost for making TPO as well as for the facilities required to do so. However, another factor must be the quality of the product. That stated, both roof styles continue to be heavily counted on to protect homes and businesses. Fortunately, as this type of roof is needed more and more in the growing Southwest Ohio region, Fusion Roofing and Restoration employees have made it a priority to hone their expertise in installing either system for their customers. Just as with sloped roofing, if you are in the market for a flat roof, Fusion Roofing will provide you with optimum results.